It’s always lively hearing from a past client but it’s especially nice when they have such lovely things to say! 😉

This happy little individual couldn’t wait to meet his parents on this chilly morning. His mum rocked the birth supported by her named midwife #HomeBirthJustHappened #Continuity 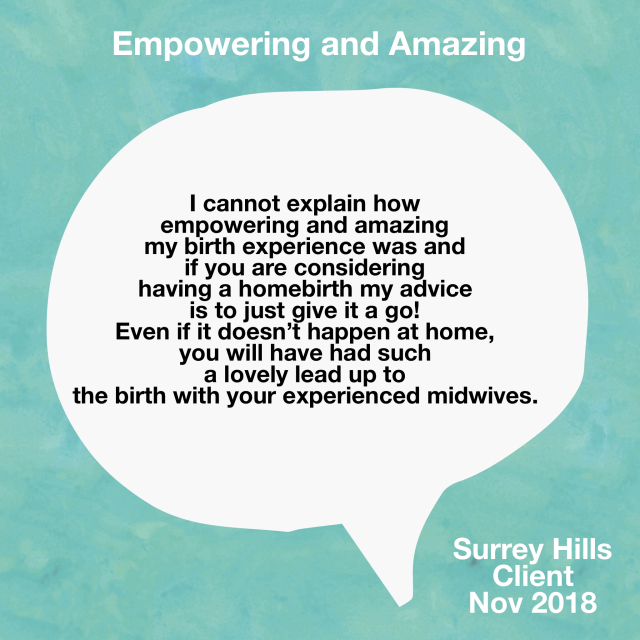 At the 8 week appointment with the midwife – when asked ‘Would you consider a homebirth’ my answer was ‘No way!’ I thought it was pretty unsafe. It wasn’t until my pregnancy yoga teacher – Louise Rogers – said to me about how amazing the team were and how I was less likely to need medical intervention if I had a homebirth.

So I came home and told my husband – much to his dismay! But he agreed to meet with the team to see what it was all about.

We did a bit of reading up in the meantime and learnt all about the effects of cortisol (the stress hormone) and oxytocin on the birthing experience. We learnt that if you homebirth, you are less likely to need medical intervention , labour can happen quicker and it can be a much calmer, powerful experience where you feel in control.

My husband and I met with Jodie and we had loads of questions for her- mine all around the safety of my baby and me and my husbands all around the mess!! We knew we were only around 15minutes drive from the hospital but we learnt from Jodie that we would have two (very experienced) midwives with us the entire time. She explained that they not only had a lot of equipment with them – should anything go wrong, but that there were warning signs that they would look out for along the way – which would indicate that we might need to transfer.

So after a lot of thought (my husband was super keen after meeting the team) we decided to sign up with the team from around 24 weeks.

Having my midwife appointments at home with my named midwife was amazing. I got to know her really well and when a scary thought/ birth story or concern came up – I could speak to her about it and get reassurance.

I practiced hypnobirthing every day, yoga and swam. I ate really well and made sure I did everything I could to get baby in the right position.

When it was time, I started having signs on the Friday that things were happening but we thought it was safe for my husband to still go to work! I went for a walk around Godalming and actually sat and watched a little waterfall stream (very hypnobirthing – down breathing! I used this visualisation in the birth.)

My husband walked in the door on Friday night and gave me a cuddle and immediately I felt like I had mild period pains – talk about Oxytocin getting things moving!

We watched the fireworks and had a good night sleep (the last one I have had in a while J) and on Saturday morning – things really started to increase. I knew I needed to be at home, in my safe place. So we put on our funny dvds – American Office, lit a fire and candles and chilled.

We gave Jodie a call to let her know that things were starting and she told us when to get in touch with her.  My husband kept trying to give me food – its true that eating becomes very difficult!

Around 5pm we started to time the contractions and updated Jodie. She instructed us to try and get a good night sleep and ordered Jon to keep feeding me! I had a bath and tried to remain calm. We went to bed but around 3am the contractions had ramped up and I couldn’t lay down anymore. I had a shower and did lots of hip movements – ‘rotate to dilate’ kept going through my mind! We hooked up the tens machine which massively helped and gave me something to focus on when each contraction started.

At 7am we phoned Jodie and said that we thought things were really moving along now. At 8am my waters broke on the stairs and I ran to the tiny downstairs loo and had a freak out – I don’t think either of us really believed it was going to happen until the waters broke. Jon was amazing and calmed me down – but I refused to leave my tiny safe space and screamed that I wanted Jodie! The relief when she arrived was huge. Jon had set up the pool so I got in and started my breathing through the surges.

My birth was incredible, crazy intense, powerful, empowering and magical. I couldn’t believe how it went. The midwives observed me the entire time, making me feel safe but leaving it to Jon and I to do together.

I was monitored but never felt interfered with at all. At one point Jodie could sense that the fears I had discussed with her were creeping in and she reassured me that everything was progressing perfectly.

After what felt like a lot of crowning and lots of extremely loud noises (I have never heard myself make those sounds before!) my gorgeous boy was born at 11.41am on Sunday 4th November. I was the first one to touch him, he went straight onto my chest, I discovered the gender and we kept the placenta attached for 40minutes and well after it had stopped pulsating.

It was the most overwhelming experience and I cannot believe it went so well – better than I could have ever imagined. I came away after birth exhausted but elated and it meant my recovery was so quick.

By 2pm I was sitting on my sofa (no mess!) with a cup of tea and cake. It was the most surreal experience.

I cannot explain how empowering and amazing my birth experience was and if you are considering having a homebirth my advice is to just give it a go!

Even if it doesn’t happen at home, you will have had such a lovely lead up to the birth with your experienced midwives. Either way you are going to do some of your labour at home so you might as well see how far you can go with an experienced midwife by your side!

These first time parents absolutely rocked their baby’s birth. Initially a star gazer, this little man was given the time and space he needed to find his own path Earthside , in to his mothers arm. #HomeBirthJustHappened #Continuity

Wonderful continuity in action as this first time mum was supported to labour and birth in the #pool at #home by her named midwife who she met at 18 weeks.